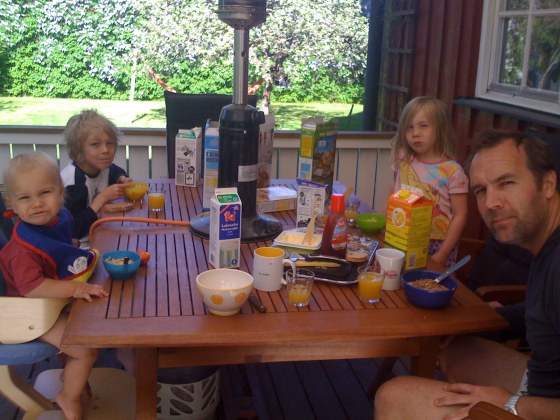 9 am - Chess on the veranda

10 am - Playing in the sprinklers

12 noon - Lunch on the veranda

2 pm -While Alfie sleeps, and Leon and Maya are at a birthday party, mummy blogs (the sun was just too hot!)

4 pm - a sexy man in shades puts the finishing touches to a trampoline we have just purchased (yes, we had to succumb, in order to stop our children from bombarding all the neighbours trampolines...)!

5 pm - Back from the birthday party, and jumping like crazy! 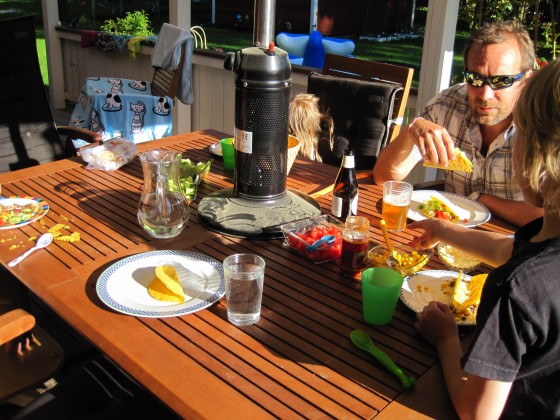 6 pm - Dinner on the veranda

7 pm - Playing "brannboll" (rounders) with the girls from next door (Maya takes it easy in the deckchair acting as referee!) 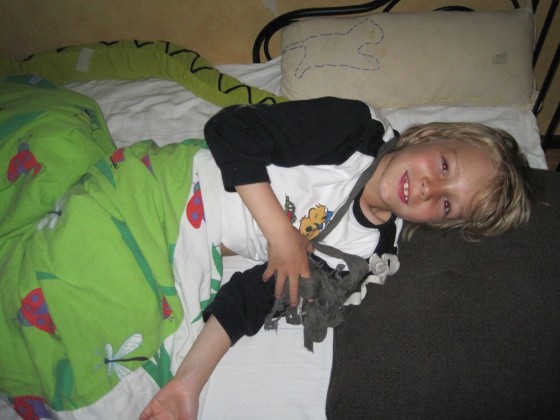 And so you see, even in Sweden we can enjoy the warmth of the sun’s rays, paddling pools and outdoor play! And thus ends the life in a day of a swede…. though the sun will continue to linger on for a few more hours, as it tends to do at this time of year in the northern hemisphere!!!!

The people who we bought our house from must have been fantastic gardeners – flowers of many different colours and varieties pop up one after the other. And when one kind dies, another kind takes it’s path. This is a rainbow of colours in our garden at the moment…. 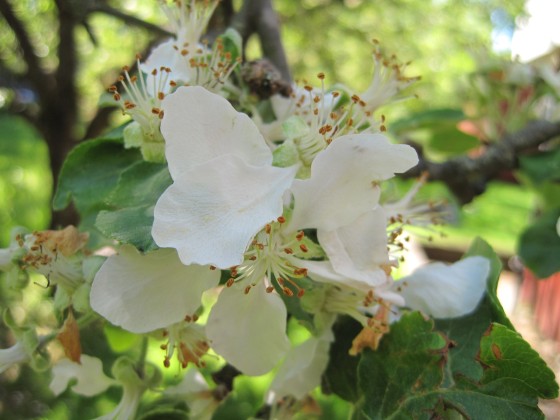 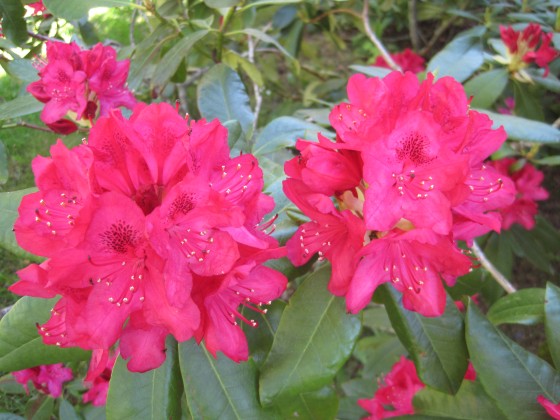 We went to a village called “Berg”, which means “mountain”, where they had their annual farming festival at the school for farmers! Well, we couldn’t miss that now could we?!

A little blurred, but these piglets were unbelievably cute!

So after looking at the goats and the horses, we slipped on some blue plastic shoes, and popped into the pig arena with lots of other swedes! Well, I’ve never seen so many completely deliciously cute piglets in all my life, ranging from the very small, to the exceedingly large (pigs that is!). I vowed there and then I would never eat another sausage in my life. Though of course I will….

So then it was off to the waffle factory, where waffles with ice-cream were all the rage.. 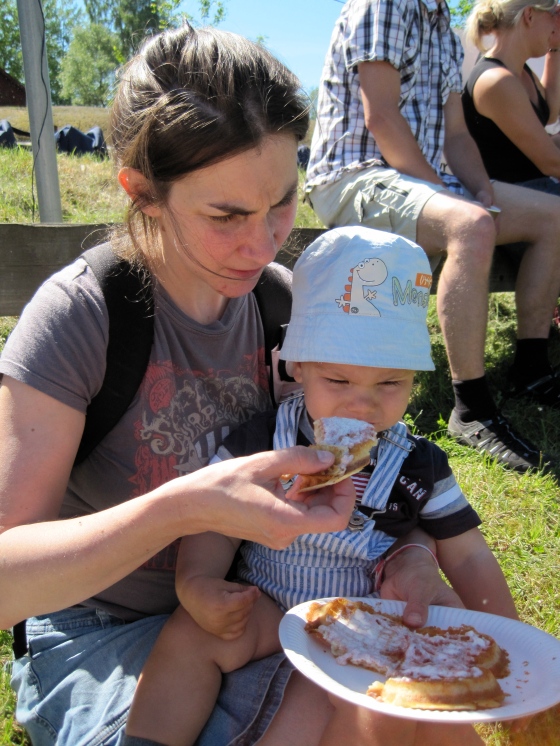 After checking out all the wool spinners, the wool weavers, and the wool crafts (though no sheep shearing I’m afraid…), it was time to check out the tractors…. 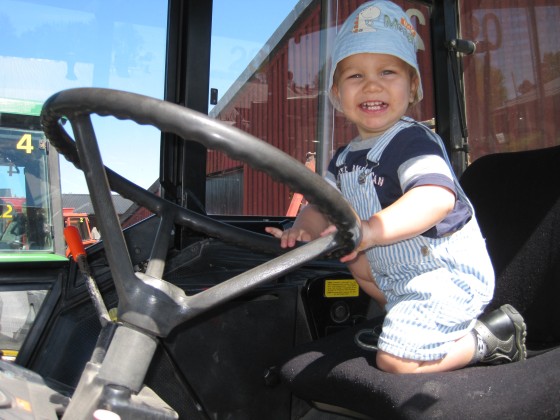 Of course "John Deere" was the best...

Then it was time to meet the swedish people who enjoy “rabbit hopping competitions”, and their selection of rabbits….

A mummy with too many children...

We were also lucky enough to observe a competitor in the rabbit hopping competition … the rabbit, however, was slightly off-course….! Did you know you can actually buy little wooden hoppy-over gates for rabbits for only 600kr (60 quid to us Brits!).

After which we saw some dog competitions (dogs running through tunnels and hopping over gates and things), and a dog who was trained to dance by his milk-bred mistress – both surprisingly good actually.

Followed by, yes you’ve guessed it, a bit of sheep herding – only in this case, it was cows….

I just love the look on those cows faces! Come on! Get a move on!!!!

And not to forget Leon’s favourite, the bees…. 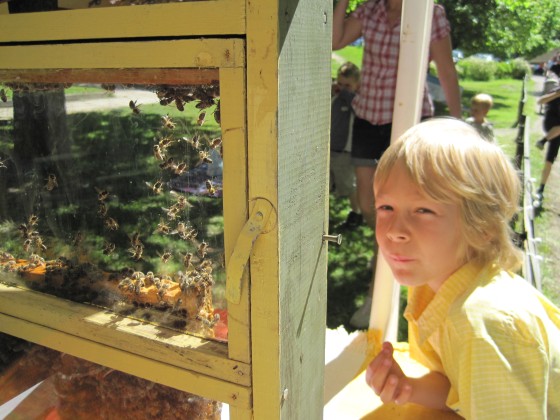 As I was searching in our “gift cupboard” (everyone has one of those don’t they?!) I found a box of jelly beans intended as a gift from the Jellybean factory in California. Now we no longer live there, and jellybeans are scarce, I decided to use them with the kids in our final activity for “mosaics”!!!! 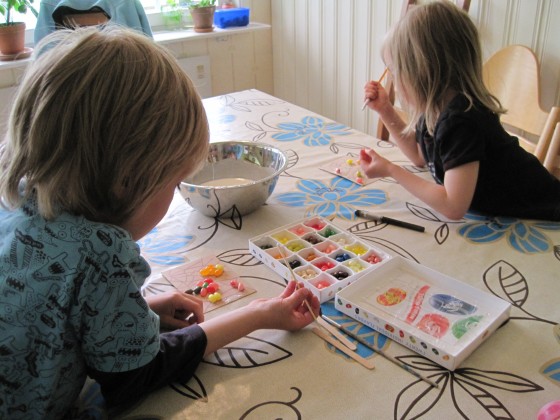 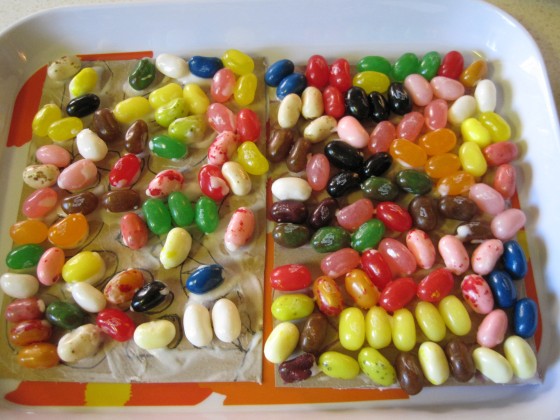 Yes, I was fully aware that this activity might induce constant whining to eat the jellybeans, and lo and behold, it did – for the first two days anyway – but now the whining has subsided. The question is – have they forgotten them? 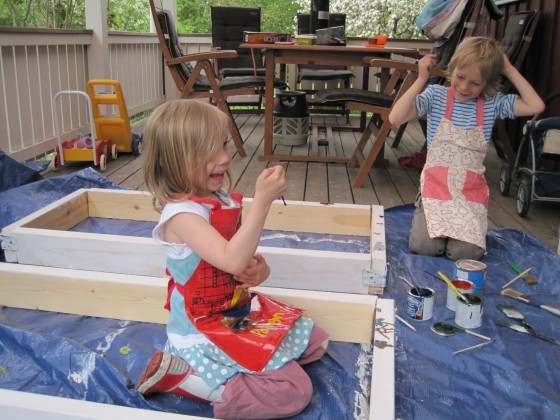 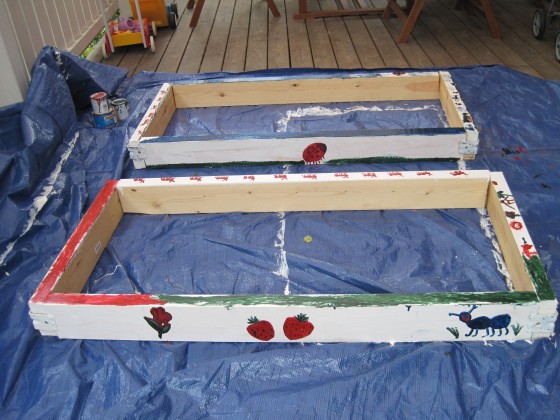 For getting his first trophy (at chess club!)… 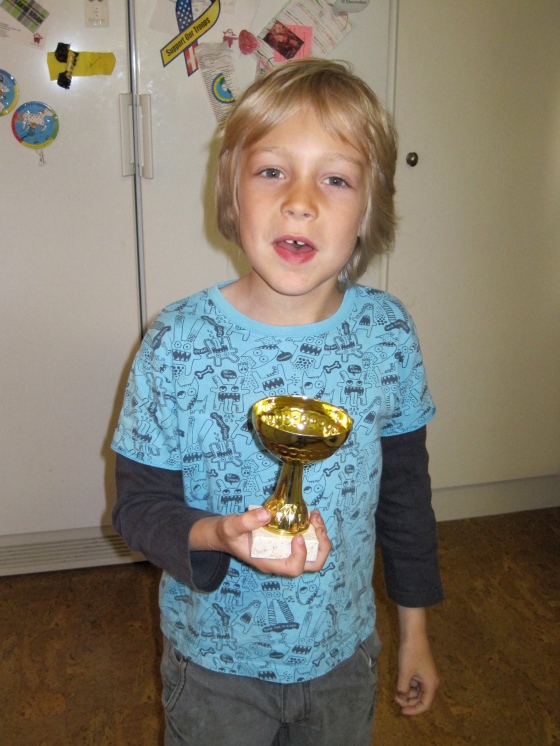 Lately we’ve been having so much fun in our fantastic garden! When the sun is shining, it is a WONDERFUL place to be!!!! 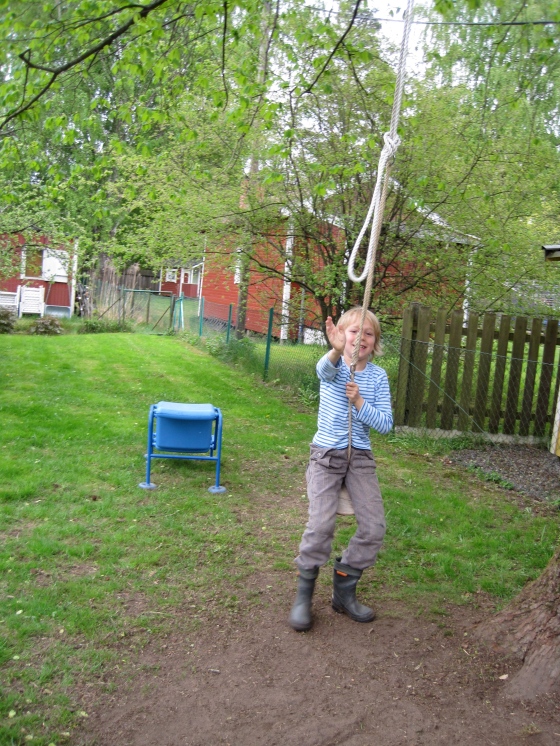 A fairy house (especially for Maia and Lola) 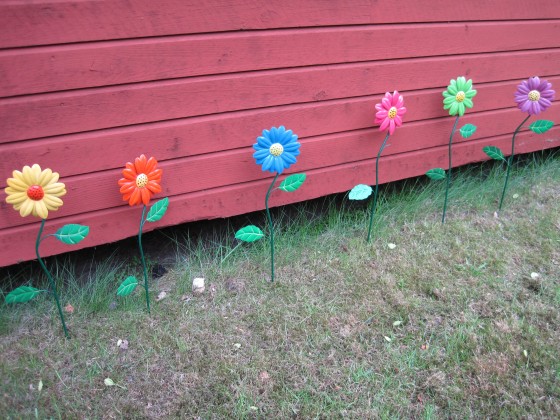 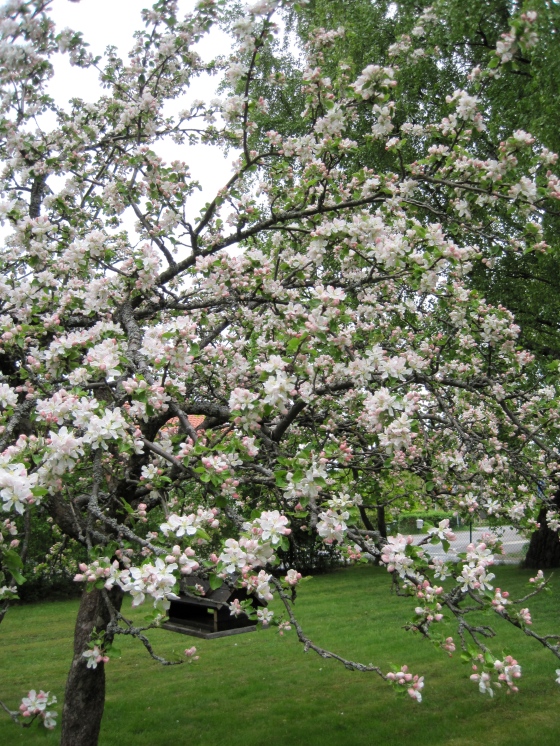 One of many apple trees... 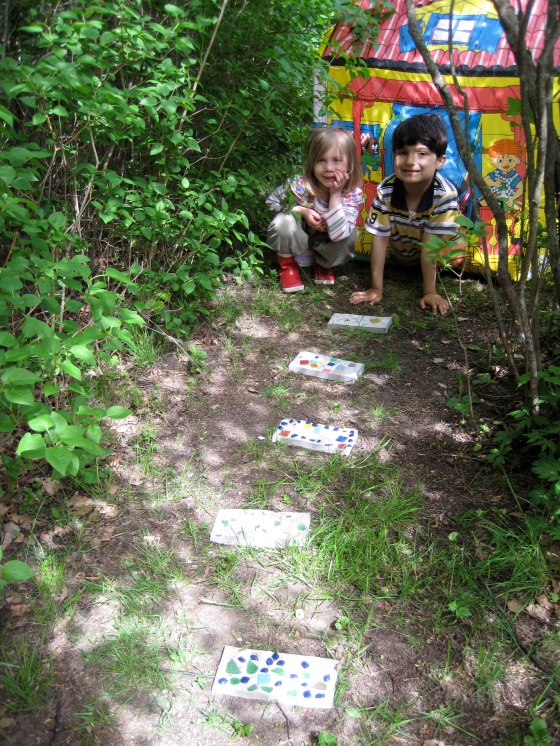 Every year the local castle organises a fantastic medieval festival, complete with jousting, music and dancing, food and crafts! We went last year and this year took dad and Arun. 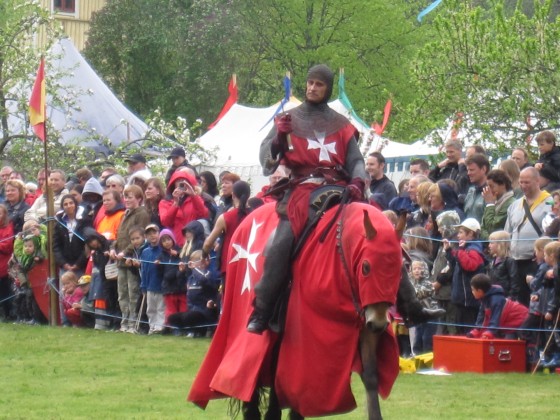 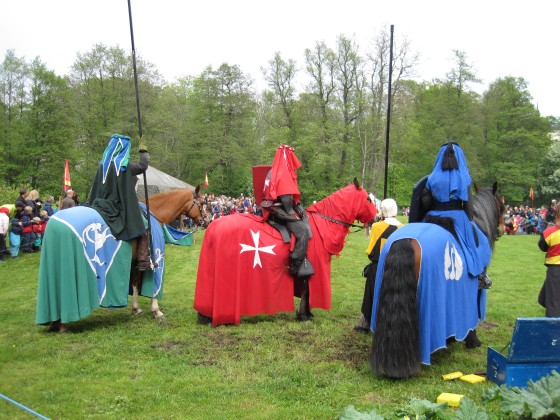 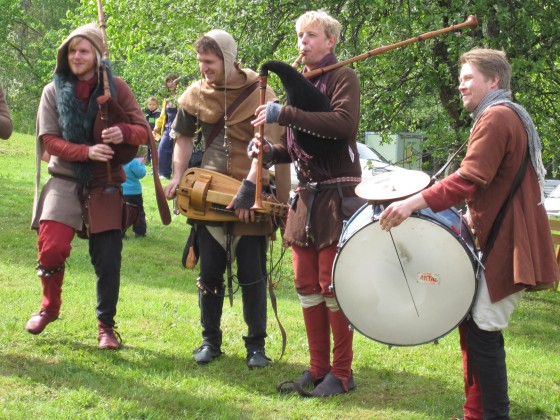 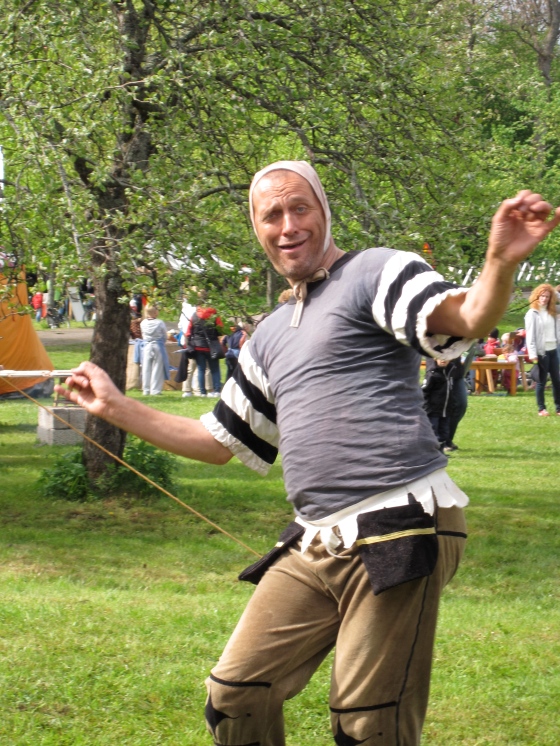 And of course we couldn’t leave without taking a photo of this chess set …. 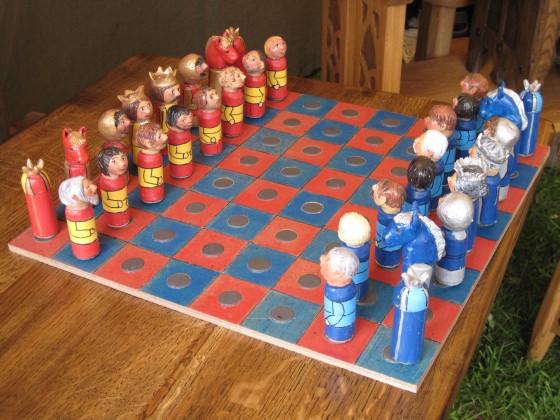 We have been reading about life-cycles, and apart from the obvious seed to flower which have been evident in our gardening, we also bought some painted lady butterfly caterpillars from Insect Lore!

The kids have had a wonderful time watching them grow from caterpillar to chrysalis to butterfly….

….. before we let them go free in the garden (after a couple of days in the habitat)! 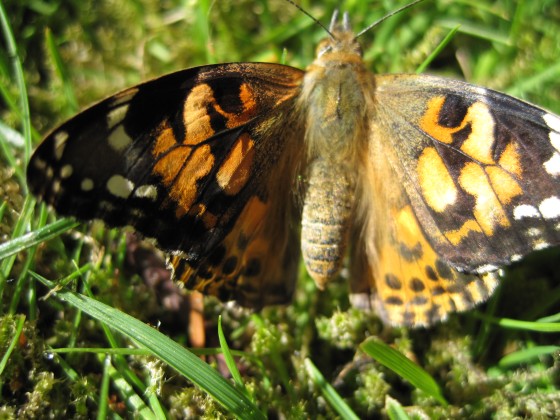 I havn’t written for a while as dad / Grandad … 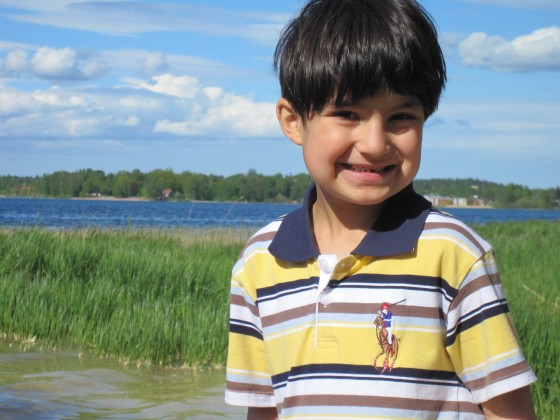 have been to stay! Arun is just about to turn 7, so being in between the two, both Leon and Maya have had lots of fun playing with him! Grandad has also turned out to be a fantastic chess opponent , a willing player of all ball games, and a great story teller!!!! Thanks dad!