Today we went to the most hilarious party!

It had a chess theme (homeschoolers – who could have guessed?!!). The photos we took are not too great, but I just HAD to include some…

Maya the pawn (black) being guided by Lennart (the chess chief) 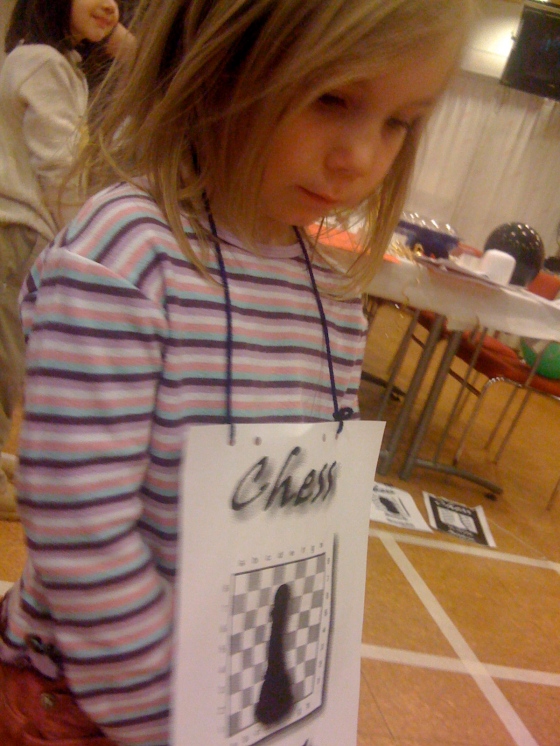 So, as you can see, we were all chess pieces in a giant game of chess!

Alfie just loves cars! All the better if there is a short shelf-like  area to push them up and down on. This is one of his favourite pushing spots – the mantelpiece by the fire! 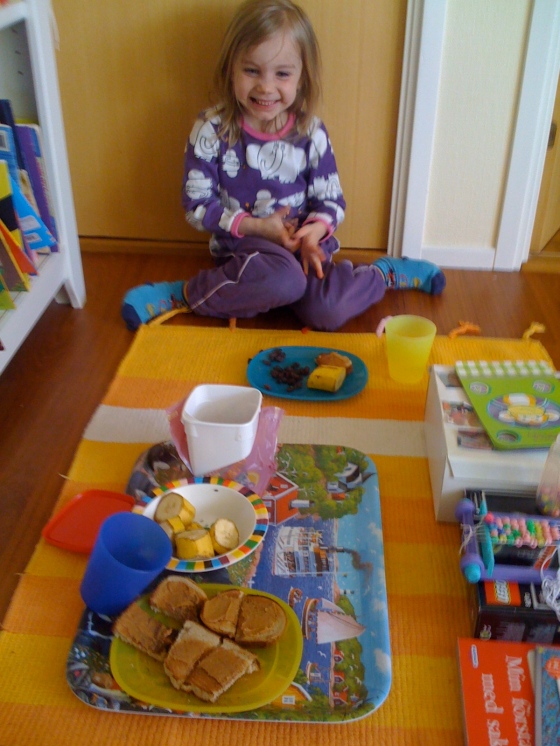 Maya arranged this for us while I was in the shower!!! 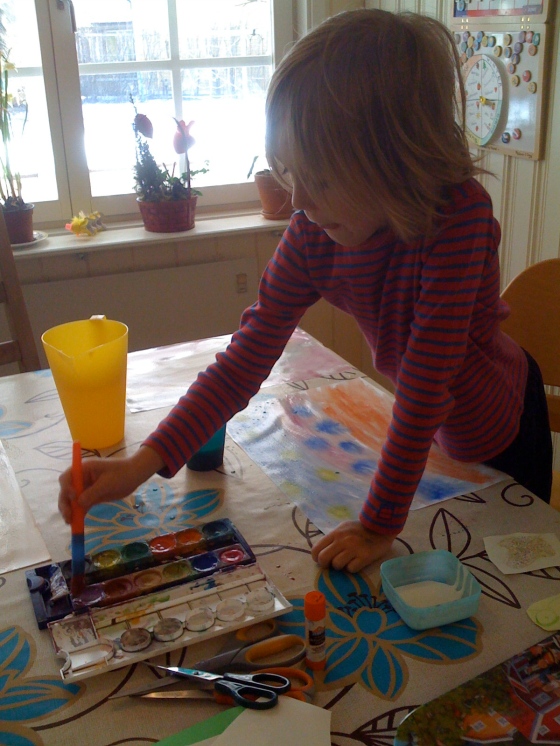 This afternoon Leon, Maya and I tried out “sugar painting”, and it had a wonderful effect!

Mix warm water and sugar in a cup, and brush onto some firm white watercolour paper. Then gently use watercolour paints to stroke or dab the brush onto the paper – it has some fascinating and “flowing” effects!

Despite only being 6+ degrees C (at its warmest!), it was a beautiful warm day! We surely cannot deny that Spring MUST be on its way???!!!

Maya, Alfie and I “soaked”(!)  the sun into our faces on a walk to the shops and down to the local park. It was fantastic, everyone was smiling!!!

A Swedish Easter custom is to tie coloured feathers onto birch branches, and then to put them in water where the buds will blossom. Here are some for sale at our local garden shop. I think they're always so pretty!

Alfie loves ducks, so a trip to the duck pond just couldn’t be passed by! As I was taking this photo however, a group of giant swans appeared right next to me, and I ashamedly got scared, grabbed the kids and ran!!!

It was a beautifully warm (that is 4+ degrees celsius!), and sunny morning, so Maya, Alfie and I set off for a picnic! Maya is currently obsessed with picnics, regardless of the weather, so we packed a thermos of hot chocolate, some bananas and some cheese sandwiches, and a blanket to sit on, and off we went down to the lake! 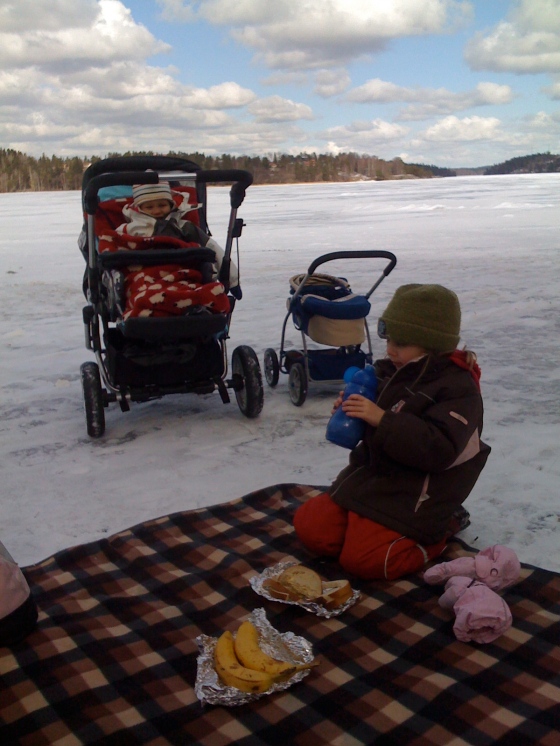 (You may think I’m cruel leaving Alfie in the pram, but he really was happy there, and he really is smiling!!!)

Maya hilariously took with her three bags stuffed full of things she may need (kaleidoscope, cuddly toys, bit of wood, a book, a mask, a shell, etc) in her doll’s pram…

And the paper and pen came in handy for a quick drawing.. 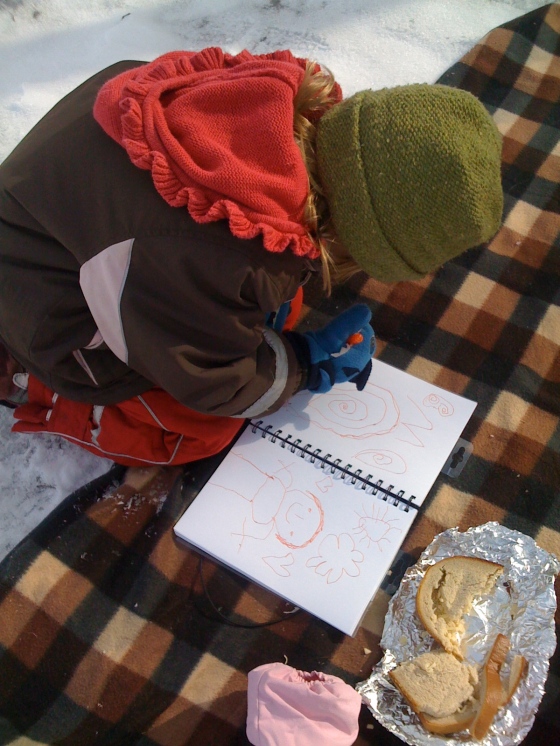 The walk also allowed for lots of nature opportunities! We observed Great Tits, Woodpeckers and Bullfinches all building their nests, and managed to discover some deer tracks in the snow!

On seeing this final icicle on a tree, we decided that Spring surely must (MUST!) be on it’s way!!!

While we were in Thailand,  Leon announced that all the children in his class had seen “Star Wars”. It came as a bit of a shock to me, as someone who has (perhaps meanly) limited my son’s tv and film viewing (so much to the extent that he still enjoys an episode of Noddy), that I was suddenly under this extreme pressure to show him, not only a potentially adult film, but also one that involves (gasp, shock, horror!)…fighting!

The pressure was increased when Leon played 10 minutes of a Star Wars Playstation game at a friend’s house, and then was given some Star Wars Lego at the birthday party.

“Arrrhhhhggg! The pressure is starting!!!” I thought. “it’s all downhill from here!!!!”

I discussed the film with my older brother (a political pacifist!), and with Richard (a Star Wars fan, and also very “soft”), and both told me it wasn’t a very aggressive film, and was really quite old fashioned, comparing it to nothing but a fairy tale. In my (slightly sad and obsessional) educational panic I looked up “Educational Aspects of Star Wars” on the internet! All is forgiven. Low and behold there is not only a university course based on comparison of Star Wars to fairytales, myths and legends, but also a “Jedi Knights” school in Belfast, where one uses the psychology of Star Wars to improve communication skills and personal development!

Happy to say however, that Leon adamantly refuses to be  “the bad guy”…. and somehow Maya manages to get Pippi in there somewhere….??? Interesting…

Will I regret this?! Watch this space! 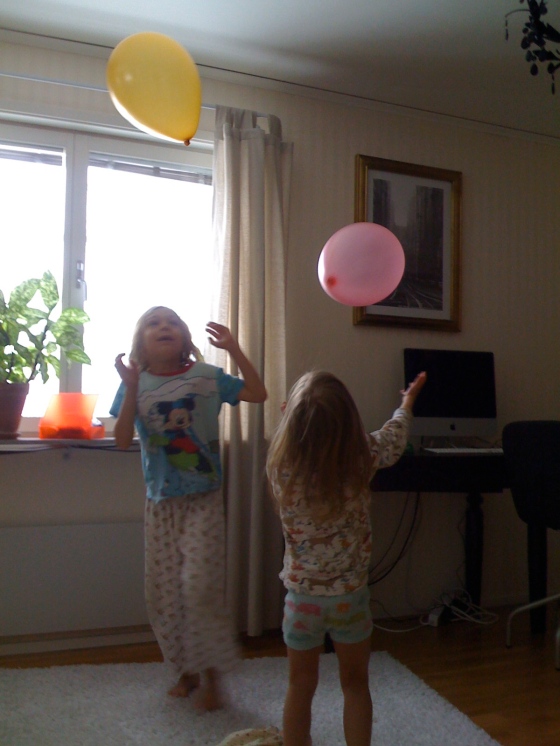 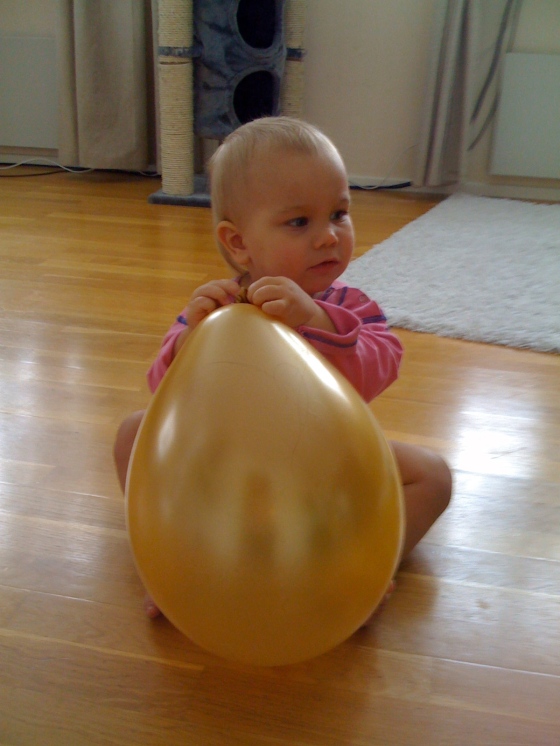 The princess and knights party was a great success!

Decorations fit for a prince/princess....! 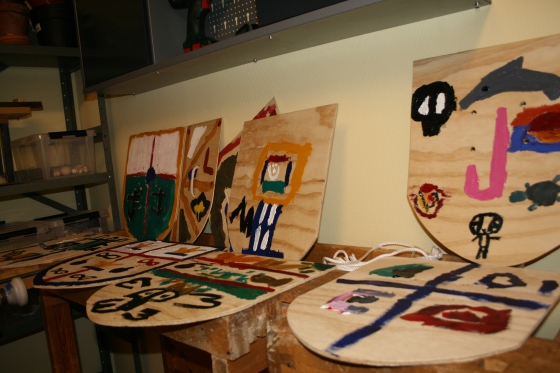 ...crown making (many thanks to Henri, queen of crowns!)..

..and a unicorn pinata!

Maya received this amazing modeling material for her birthday called “Fischer Tip”. It is from Germany and made from some kind of biodegradable maize (?!). The kids have been playing with it for hours – no – days – and I highly recommend it. Fun for adults too!